"Multifarious Visions from the Sonic Margins"

Posted by dissolving.records at 03:56 No comments:

Long time supporters and new customers alike are advised that as well as the usual channels (see below) there is now a Dissolving Records online shop for those who prefer that option.

Orders are as ever also more than welcome direct via email or by ordering through discogs or bandcamp, for those releases available there.

Posted by dissolving.records at 11:25 No comments:

Here is their take on it:

"Highly organic, kinetic concrete and reel-time ferric sculptures from Thomas Shrubsole, yielding almost 3 hours of lower case rustles resembling free jazz played by nature.
Working in a richly imaginative realm shared by everyone from Rashad Becker to Anne Guthrie, Ekoplekz to Decimus, ‘Tape Music’ is a significant batch of scrabbly abstraction from one of the North West’s most quietly unassuming and uncompromising operators. Working hands-on with his trusted reel-to-reel, found objects and 2nd-hand instrumentation, Shrubsole enacts a form of intimate animism that gives life to sounds lesser heard. Mixing skin with grit and machine, his improvised interventions coax out a plethora of almost anthropomorphic or bestial tones from things without a heart or brain, and effectively using his own body to better connect with the world around him and bring listeners to a granular, haptic level of musical perception.
Recorded in 2015 and left to mulch in the archive, the results are entirely analog from nose to tail, exploring a bio-organic feedback system that investigates, in his own words, “notions of the prosaic and the exotic, the personal as it pertains to the physically local and the distant, proximate and disembodied, the diaristic and the documentary: Kinetic performative physical improvisational concrete.” "

Copies are also available direct by emailing dissolving or through dissolving on discogs.
Posted by dissolving.records at 15:52 No comments:

'Back in 2016, Thomas Shrubsole released 'The Portable archive' under his Sub Loam name (see Vital Weekly 1051), which was culled from material he already recorded in 2009 and 2010. It is something I enjoyed very much, as Sub Loam is something along the lines of lo-fi electronics, drones, ambience, and field recordings. Now there is a tape with "two recently rediscovered examples" from the same period, which Sub Loam feels they should be heard out there as well, and, sure, why not? This is something that could have also been surely been on the original release. On the first side, there is 'Soil Surface', a slow rhythm piece. Or perhaps something that is on a loop device but slowed down quite a bit. In sync we have a mild synth sound burping away. It is a very moody piece and almost a dub-like one at that; all bass but no dance riddim. This is a particularly great piece by Sub Loam. The B-side contains 'Stone Fragment', in which the guitar plays quite a big role, strummed in a really odd way, and set against a set of misty electronic backing, with an odd flanging effect on the strings. It seems like he's playing the guitar with a stick, creating odd timbres. Buried in the background there is a bit of percussion. It is a totally different kind of piece and a most enjoyable one at that as well. I sure can believe that if you found this after ten years you would want to release it.' (FdW)

Buy a copy by emailing direct or from Boomkat
Posted by dissolving.records at 14:00 No comments:


Here's what they have to say about it:

The A-side’s Soil Surface’ speaks to Shrubsole’s signature grasp of slow-moving sonic murk with nearly 10 minutes of endearingly weary dub chords perfused with acidic percolations that appear to mimic a sped-up (but still very slow) time-lapse image of soil dynamics, while the other side’s 11 minute piece ’Stone Fragment’ catches him picking out coruscating guitar strings and against peripheral percussion and distant vocal drones in a style murkily resonating with the mystic appeal of Zoviet France. Both are assuredly swaddled in layers of ferric tape hiss. Both humbly worth your time."

Posted by dissolving.records at 11:08 No comments:

Coming soon on Dissolving sub-label Parenthetical Activities, a special limited edition Double Cassette/Art Box Set containing two and a half hours of music and a 48-page full-colour art booklet alongside postcards and inserts.

Posted by dissolving.records at 15:23 No comments: 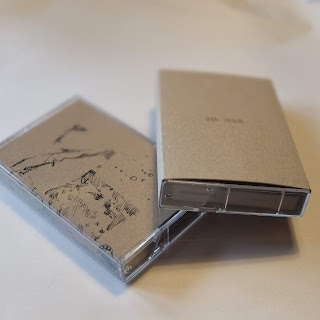 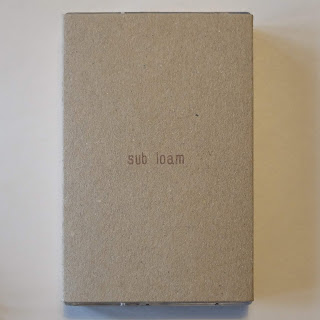 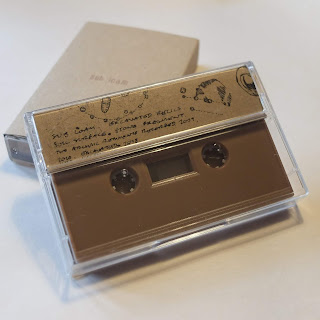 Supplement to the Portable Archive

Outliers from the early trilogy of Cotton Goods/Dissolving releases Ohr, 2 and Earthern Circle (2009 - 2010, as documented on The Portable Archive and digitally), these two tracks, around ten minutes each, are thematically and musically related whilst standing at a remove from the circle of those original releases. Four-track murk, hiss and delay, fragmentary percussives, guitar strings as contour lines and twisting stems, burgeoning organic clouds, analogue electronics, observation and contemplation.

The connections with the spiked rural wanderings of Earthern Circle, the heavy soil dubs of 2 and the radiant moods of Ohr are clear whilst also travelling outwards from those zones towards the territory where these two other, previously unreleased, distinct artefacts were discovered.

Email Sub Loam or Dissolving Records
Posted by dissolving.records at 15:12 No comments: